Similarly to what we saw earlier this year with Garyn and Clare's cases(of the Arpaio 5) Dane's charges have been scratched. What this means is that technically there is no case against him. But the court will maintain an ability to bring charge against him for up to seven years, which they did in Garyn and Clare's cases. So while things are currently looking good there is no telling what the court may be up to.
It seems as though this could be some new sort of tactic. The police arbitrarily arrest people, charge them with this or that and see what they can make stick. If nothing sticks they drop it in a manner that allows them to actually charge people at a later date, keeping folks in a sort of limbo- for seven years! Ain't the police state grand?
In Dane's case an undercover actually alleges that he witnessed Dane throwing and providing rocks to others. In the end though, he was unsure if any of the supposed rocks thrown or provided and thrown by others actually hit anyone. Interesting. Also interesting is the fact that at least two of the charges of aggravated assault were for rocks that flew towards but never even hit anyone. So basically they were just trying to pin all rock-throwing on Dane without any evidence whatsoever.
Another thing to point out is that it has been reported to us by a friend from Phoenix that another person was approached by cops after the protest in a similar manner. After being told they were under arrest they told cops that they were full of shit, that they did nothing and there was no way to identify anyone who had done anything. At this point cops made no attempt to arrest this person and the person left unobstructed.
Dane himself, the person who allegedly performed five counts of agg. assault on an officer w/a deadly weapon or dangerous instrument and one count of riot was not picked up until 2 hours after the supposed incident. If someone was indeed this much of a threat to officers and "public safety" wouldn't it be advisable for cops to grab him as soon as it started rather than wait two hours and allow him to possibly escape?
Well for now Dane is "free". But please remember that this does not mean he's in the clear. The bail has been returned. Any money raised that is unble to be returned will be held in the Tucson area for future legal issues that may arise. Thanks to all those who stepped up and supported Dane through this.
Posted by BOAF at 3:20 PM No comments: 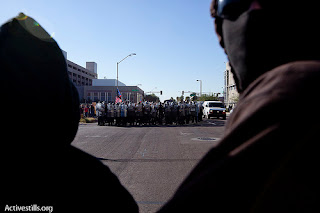 A few hundred Arizonans showed up ready to hold it down on Saturday, November 13 against the neo-nazi National Socialist Movement. Downtown Phoenix became pretty heated after a large number of people in black bloc attire took the street directly in front of nazis and their protectors the Phoenix Police Department. With a few different banners to help create a blockade people seemingly unaffiliated took space directly in front of the black bloc at times, showing that a lot of people are more than willing to stand up to both the cops and nazis.
There is already plenty of news and videos out there so I won't go on other than to say that police used pepper spray about ten times only to see demonstrators come right back to face them. They also fired pepper balls into the crowd over tops of shields without even aiming, hitting some in the face. After all the action was basically done two people were arrested. One of them from Tucson. Here's something from supporters:
Saturday, November 13th, 2010 the National Socialist Movement gathered in downtown Phoenix, Arizona as a part of their humorously titled “Reclaim the Southwest 2” tour. Politicians in Arizona who draft and sponsor racist legislation, such as Russell Pearce who sponsored SB1070, have been exposed for their connections to leaders of this movement and furthermore the NSM consider themselves to be on the forefront of the push toward more draconian, discriminatory, and racist laws. This year the neo-nazis came to spread their racist ideology and protest the injunctions made to SB 1070 but were met in the streets by a large, diverse crowd of folks who were there to shut them down and send the message that their hate isn’t welcome in Arizona.
The Phoenix Police Department marched and collaborated with the NSM to attack protesters with brute force and weapons such as pepper bullets and pepper spray. If there was ever any doubt in one’s mind of the veracity of claims that the PPD is a racist institution, they can be laid to rest. Minutes before the NSM's permit would have expired the PPD executed their attack on demonstrators and then extended the permit later into the afternoon wasting time, energy, and resources to protect neo-nazis. Police indiscriminately used pepper spray and pepper bullets, causing injury to demonstrators and innocent bystanders alike. Multiple people were shot in the face with pepper bullets as well. The racist PPD, who actually deport more people than the infamous Sheriff Joe Arpaio, sent undercover officers/antagonists into the crowd of hundreds and into the black bloc working from both sides to target individuals. Photos and written accounts of the day reveal that police officers directed the NSM the entire time and worked alongside them giving orders of where to go, when to tighten up, allowing them to wrap their flags into clubs and move through the police line to instigate and then further their violently racist march.
Two individuals were arbitrarily targeted and arrested at the end of the day to be scapegoats for alleged “assaults.” One of them, Dane Rossman is currently facing 5 counts of aggravated assault with a deadly weapon/dangerous instrument and 1 count of rioting. Dane has done extensive work in numerous communities to resist racism and to create a world that is based on mutual aid. He has been working with No More Deaths since 2007 to do migrant solidarity and humanitarian aid on the US/Mexico border and most recently has been organizing with the Tucson Childcare Collective and Migrapatrol Copwatch to resist the current attacks on Latino communities in Tucson. Dane had a bail of $7,500 that was paid for on November 13th, 2010 through a loan and needs assistance in paying this back and  in raising additional legal funds. We are thankful for all the support already received and appreciate your involvement in the fight against fascism!

If you want to help please contact us here and we can put you in touch with the right people.
borderopposition@gmail.com

Thanks,
BOAF
Posted by BOAF at 5:42 PM No comments:

As usual a bunch of peeps volunteered and were a big part of the Solidarity Cafe event being awesome. About 25 people showed up early enough to catch a screening of Broken Rainbow, a documentary about the fight of the Dineh' and Hopi peoples against Peabody Coal. After the movie we were bombarded with a number of delicious treats including Strawberry-filled Crepes, Cupcakes, a Raw Pumpkin Pie, Cookies, Smoothies, Fry Bread, Egg Sandwiches, Beans and Cornbread. We also served Coffee and Tea. Once given a chance to load up, a few of our friends fresh back from the road picked up instruments and treated us to some ditties. Allison Appel, Doug Fur, Niki Berger and Luke Romano stepped up after Rudy Cortese was unable to make it(maybe next time). Big kid drinks were served as well and Missing Parts took the stage and kicked out the jams for about an hour. After the live music was done DJ Theresa Wild set the tone and many of us shook our rumps late into the night. There was an increase of about $300 from last year's event showing that Tucsonan's are getting better at putting events together and their also showing a much bigger interest in supporting the many fights against white supremacy and colonialism. Thanks to all who came out!
BOAF
Posted by BOAF at 5:23 PM No comments:

BOAF
The Border Opposition Action Fund was formed to financially support those taking action in opposition to borders and colonization. In response to the State's escalating attack on indigenous and migrant people, a diversity of tactics is necessary. Your support is equally important! Contact Us @ borderopposition@gmail.com